by Pierce Ivory
The attic at Gp Digital Print is a ‘graveyard’ seldom frequented by modern day print folk. When I say graveyard I don’t mean it in the human sense. I mean it in the historical, the nostalgic, another wonderful print museum in the making. 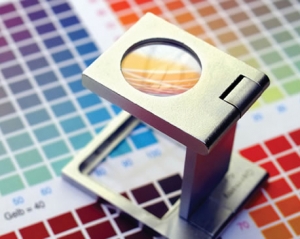 I felt it was right to pay a visit to the past as time tends to erase the boundaries between reality and memory. The past where graphic reproduction (aka plate-making, film planning, drum scanning, Cromalin proofing and so much more) was a form of art that couldn’t be replicated by any computer without human intervention. The fact of the matter is that the print industry has literally moved at the speed of light. To us Graphic Reproduction heads that’s 186.000 miles per second, now that’s fast! This honorable Industry which was always close to my own heart has changed beyond recognition.

Pre-press was once a  ‘technical science’ where the operator in many senses of the word had to be a ‘scientist’ themselves. It still remains a technical science but this time the operator’s input has been demoted, more to the level of assistant. The science is pre-programmed within smart software controlling colour, electrical charges, measuring paper moisture, curing ink and imposing pages to name but a few. The list is endless, the potential is infinite.

In the good oul days a 4 page A4 brochure could have taken anytime up to 1 week to progress through the process from graphic repro – pre-press right through to the final print run. Nowadays that process can be replicated within hours of artwork leaving the graphic designer’s mac. All communication can be done electronically without a word been ever spoken. This silent form of communication is how we roll these days.

In this new world of fingertip printing which I like to call the ‘Command P Generation’, its sometimes nice to pay a visit to the Repro Houses of 15-20 years ago. Its nice to compare the old with the new. There is no one doubting the huge breakthroughs in digital technology and how it has made our lives as Printers, Pre-Press Operatives and Graphic Designers so much easier. BUT we need to ask ourselves the question, has digital technology dumbed us down as operators? Has it stolen from us the power to think creatively on the fly? Are we now slaves to this technology? 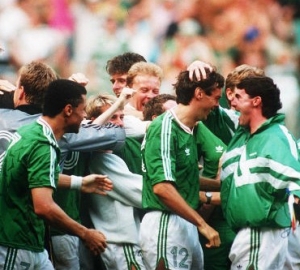 1990 was the year of self belief. The World Cup of Italia ’90 was the catalyst (in many an opinion) that sparked our emergence from recession with our pride intact. It was also my first summer as an apprentice in the then slower and ‘hard to find work’ world of pre-press. There was no email (and if there was, nobody told me) so we relied on the good old fashioned courier and An Post to deliver artwork to us.

Artwork was supplied as hard copy. We had to turn it to negative film in order to bring it through the repro process. Hard copy artwork was usually a black and white bromide with an overlay sheet with colour instructions on it. It was shot (photographed) on a Dainipon Horizontal Camera the size of a house. It was then processed in a darkroom using foul smelling chemicals such as Developer and Fixer to produce the base negative from which the magic began.

When the ‘Neg’ was prepared (usually by me the apprentice) it was handed over to the Planners for film makeup. This is where the skill lay. Knowledge of colour breakdown from pantone to cmyk was essential. Understanding of dot angles was crucial with each colour having their own angle so that ‘screen clash’ wouldn’t occur. Flat tints, Mezzo tints, Gradation sheets, Rose patterns, Round dots, Square dots, Colour separation and even F-stop numbers were contributing factors to the sum of all that was Graphic Reproduction.

Blessed were the Scanner Operators (and the film planners) 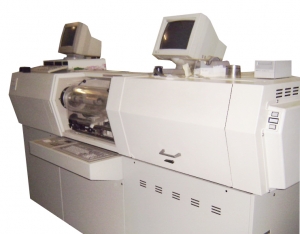 The Drum Scanner Operator was in those days, top of the heap. Standing over a Linotype-Hell 380T drum scanner retailing at a hefty £180k was a privilege. They were operating the Rolls Royce of the Repro world. Weeks of training plus all of their experience would be called into action to produce a pristine, sharp and colourful scan.

When the skilled planners got their hands on the negatives and the scanned separations they would produce separated film from a complex combination of masks and calculated exposures using ‘shrink and spread’ techniques. The resulting film was sent into the proofing department for Cromalin production which in turn was sent onto the client for approval.

Today it is rare to be asked for a proof before printing. Digital files are supplied as a print ready pdf. The reproduction is already built in, eliminating all of the processes of the past. Scanning is no longer an option as digital photography is commonplace. Film output is now replaced with direct-to-plate systems spitting out separated printing plates within seconds. Digital printing on the other hand is putting an end to these plate making systems as it uses direct to paper technology. It’s always changing and print companies need to embrace this change as quickly as it happens.

Time and technology are ever conquering, breaking down barriers and always striving for perfection, machine based perfection. To me this is key, there is a differential that dwells within the conscious mind. When we as humans seek perfection we don’t turn to algorithms or equations. We don’t look for it in the language of binary. We turn to each other. We share our precious knowledge and our wealth of experience. We think in real time just like any computer but the only difference is our creative mind, our unstoppable curiosity and above all our human eye.

To keep in touch with the latest news from Gp Digital. Subscribe Here.